My beauty routine often becomes very monotonous. I can typically get through the process while my mind goes through the errands I need to run, the diapers I need to order and the emails I need to send. I look up and my face is done without even realizing I had picked up a brush. In part thanks to Birchbox and also to friends who have introduced me to new products (I rarely purchase products randomly), I’ve found a handful of new (to me) products that I’m becoming quite fond of.

Benefit’s They’re Real mascara is amazing. It’s all about the wand and this one has it all. It thickens and lengthens lashes, but I love how the tip of this wand allows you to get those lashes that used to get left behind. They sell a mini version, so it may be worth checking out.

I hadn’t been happy with the primer I was previously using, so while I was at the Benefit stand, the specialist told me this was their most popular primer. The POREfessional is meant to aid in minimizing pores which I don’t necessarily have an issue with, although it can’t hurt. I love it though because it goes on feeling silky yet ends with a matte finish and does a wonderful job keeping my makeup in place.

Stila’s Smudge Stick Waterproof Eyeliner was actually an unendorsed product that I happened to grab while at Ulta a few weeks ago. I typically wear a brown of black liner, but with all of the blue fashion teasing me already this coming season, I wanted a liner to go with it. I went with bluefin, although they had a few different shades of blue to choose from.

This one isn’t new to me, but I recently broke it out again. Since we’re at the shore this week, Laura Mercier’s Tinted Moisturizer is a necessity. It has an SPF 20 and adds the perfect amount of color without looking like you’re wearing makeup. It’s awesome and I’ll probably be keeping it out for a while. 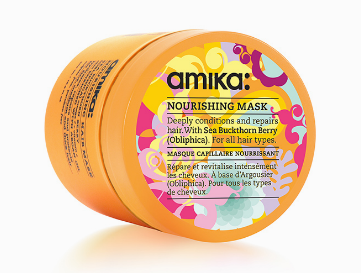 Finally, Amika’s Nourishing Mask. Kate over at The Small Thing’s Blog (one of my fav’s) had raved about this product before for the way it added moisture to her hair without weighing it down. My hair gets put through a lot between coloring (although less now that I’m not adding blonde any longer), blowdrying and styling. I’ve been using this mask typically once a week and I love the way it replenishes my hair. As with the mascara, they also sell it in a smaller sample size in case you’re not ready to commit.

It feels good and rather rejuvenating to break out of my makeup shell! Have you tried any new  products worth sharing lately?