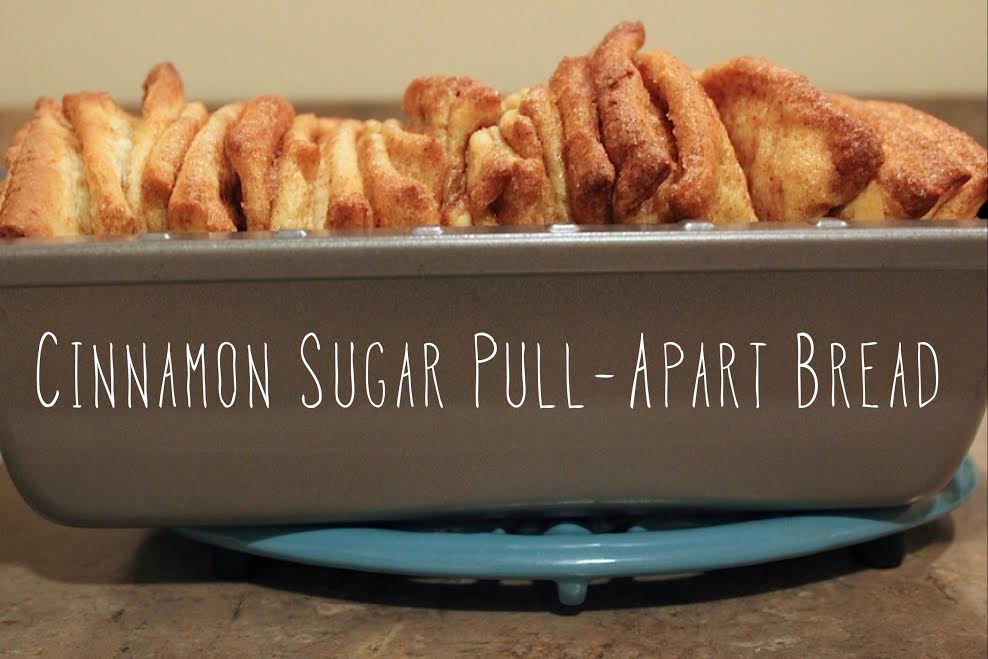 I’m sure it’s obvious by now that I have a weakness for all things cinnamon and sugar. There’s just something about that combo that I can rarely pass by. This pull-apart bread isn’t difficult by any means. You do, however, need to pay careful attention to the instructions when it comes to the cutting portion. I ended up cutting the strips incorrectly which led to a loaf pan that wasn’t quite full (as you can see below). Luckily I was able to re-cut some of the sections and manipulate the dough a bit. It ended up working perfectly and you’d never know anything went wrong by the pictures. I’m just letting you know so you can avoid having to tackle any manipulations when you try this heavenly goodness yourself. 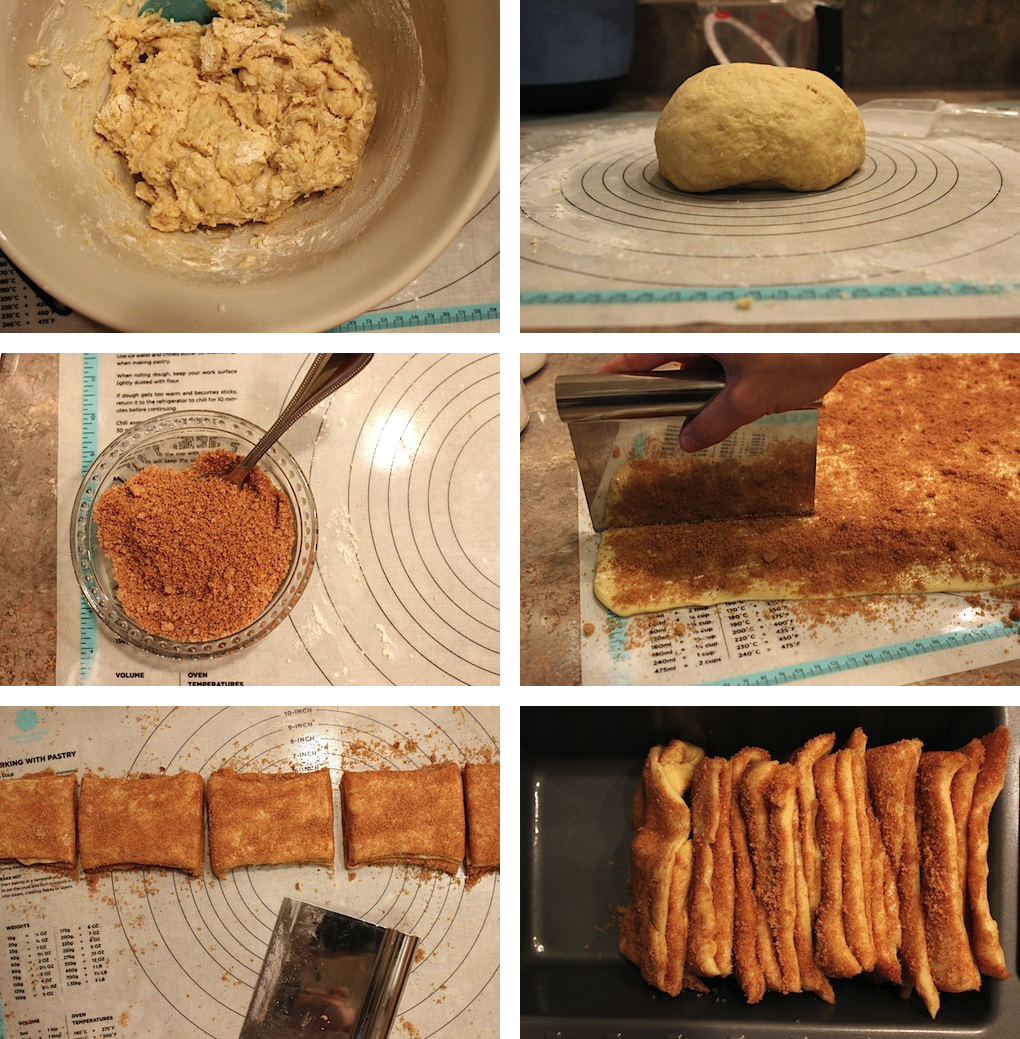 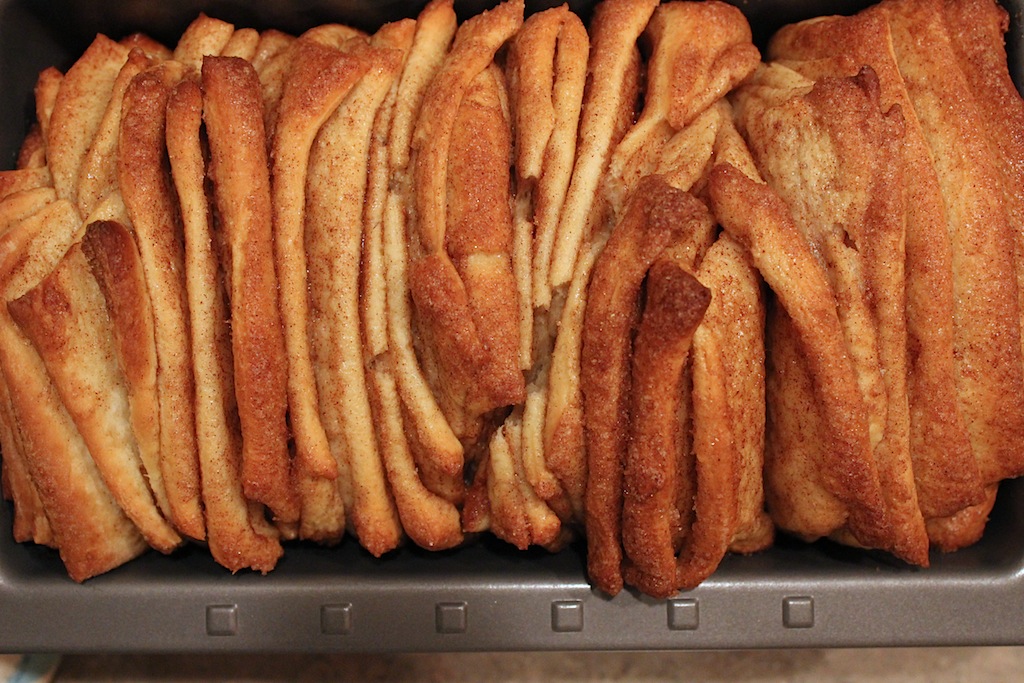 Cinnamon Sugar Pull-Apart Bread via Two of a Kind:

Make the dough:
In a large bowl, heat milk and water until warm – about 30 seconds in the microwave should do. Add the yeast and 1 tablespoon sugar. Whisk together until thoroughly combined and let sit until foamy, about 10 minutes.
Add the remaining sugar and the rest of the dough ingredients (butter through eggs) to the milk mixture, stirring everything until it comes together to form a shaggy ball. Then knead the dough by hand (or with a dough hook attachment) until it’s smooth and elastic – this will take about 10 minutes (or less if using a stand mixer). Shape dough into a ball and place in a lightly oiled bowl, cover and let it rise until doubled in size, about 1-2 hours.

Make the filling:
While the dough rises, combine the brown sugar, cinnamon and salt in a small bowl. Set aside.
Shape and bake the loaf:
Grease a 9″x5″ loaf pan or Pullman loaf pan (for a loaf with perfectly straight sides).
After the dough has risen, turn it out onto a lightly floured work surface. Roll out dough to a 12″x24″ rectangle.
Spread the butter over the dough into an even layer. Sprinkle the brown sugar filling over the butter.
Using a sharp knife or bench scraper, cut dough lengthwise into 4 equal-sized strips. Stack the strips on top of one another and cut the stack into 6 equal-sized pieces.
At this point, you can layer the dough stacks, cut sides up, neatly in the loaf pan. (It helps to tilt the loaf pan a bit to keep your stacks from folding over on themselves.) Or, for a messier look, cut each dough stack in half, stretch it into a rectangle, fold it in half and then place in the pan with the folded edge perpendicular to the bottom of the pan. It’s OK if some stacks stick up higher than others.
Cover loaf with a clean kitchen towel and let rise until doubled in size, about 1 hour.
About 15 minutes before dough has finished rising, preheat oven to 350 degrees.
Sprinkle top of loaf with sliced almonds, if using, and bake for 40-45 minutes until golden brown. If the top of the loaf gets too brown before it is done baking, cover loosely with foil.
Remove pan from oven and turn out bread onto a wire rack. Let cool slightly before serving.